Stops all kinds of diarrhea

With it’s unique work mechanism , Bulardi® Probiotic attaches the bad bacteria for itself and dissolves bacterial toxins, so furthermore it completely eliminates cause of diarrhea in the digestive tract and prevents their malicious effect.

Bulardi® Probiotic is extremely efficient if you are using it as a prevention. It is 100% natural product, which eliminates the bad bacteria and their toxins out of your body. While at the same time, it is regulating the acidity, repairs the mucosal and increases the local immunity in the digestive tract.

1. Diarrhea induced with the usage of antibiotics

Diarrhea is present at 40% of the people who are using antibiotics!
Bulardi® Probiotic is the only natural product that you can use with all the antibiotics on the market!
That is making him perfect in the battle against diarrhea induced with antibiotics.

One big randomized controlled trial have been done with S. boulardii that included a total of three different treatment arms.

Kollaritsch et al enrolled 1231 Austrian tourists traveling to hot climates and randomized travelers to either of two doses of S. boulardii (250 or 500 mg/d) or placebo for 3 weeks. The treatment was started 5 days prior to the trip and continued through the duration of the trip.

No adverse reaction was noted by the travelers in either of these studies.

That concludes that Bulardi should be given as efficient prevention of traveler’s diarrhea. 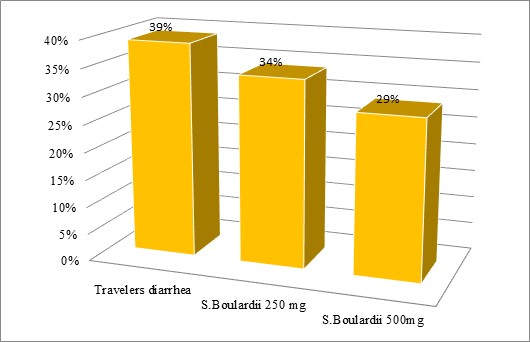 Bulardi® Probiotic dissolves bacterial toxins and prevents their attachment for the receptors resulting prevention of their malicious effect.Protective ability on the cells of epitel (wall of intestines):
– Bulardi® Probiotic reduces the excretion of electrolytes, normalizing the regulation of water and body salts.
– Bulardi® Probiotic increases the decomposition of sugars and increases the intake of good nutrients.
– Regenerates the damaged tissue and speeds up the recovery.
– Prevents the loss of epitel and entry of malicious microorganisms into the blood stream.
Bulardi® Probiotic activates the immune system in the intestine and leads to an increase in antibodies that fight the causes of diarrhea.
Prevents strong local inflammatory reaction by reducing the creation of compounds that cause the inflammatory reaction.

Diarrhea is a rapid movement of fecal matter through the colon.

Under normal conditions, food travels from the stomach to the small intestine, there it absorbs nutrients and water, and continue the path to the colon where the part that is not absorbed or used eventually ejected.

Sometimes, infections, intoxication, inflammation and other situations result in a distortion of the normal intestine, and fluid and nutrients pass rapidly. The consequence of this fast-moving intestines is the appearance of reduced density stool. Before the appearance of this condition leads to marked peristalsis (bowel movement), which often accompanied by painful cramping.

Diarrhea can be acute or chronic. Acute diarrhea equals more than three stools a day, with a capacity greater than 200ml and it lasts less than 3 weeks. Anything over three weeks is a chronic diarrhea. In cases of severe malnutrition, chronic diarrhea condition may cause a fatal outcome, which often occurs especially in developing countries.

The causes and clinical studies

Diarrhea caused by various infectious agents, among which are especially significant:

In addition to these infectious causes, diarrhea may occur due to:

All these factors cause diarrhea by four different mechanisms:

Secretory diarrhea is the result of increased secretion of electrolytes and other substances in small and large intestine. Stimulators of secretion may be: enterotoxins bacteria (Vibrio cholerae, Shigeo, Escherichia coli), enteropathogenic viruses, bile salts, unabsorbed fat from foods, some types of drugs, gastrointestinal hormones (gastrin, vasointestinal peptide, calcitonin, serotonin), damage to intestinal walls, etc.. This type of diarrhea occurs ten times more common in women than in men, especially in people older than 60 years. It usually goes without other symptoms, but may appear sick, nausea, vomiting, abdominal pain, abdominal bloating and weight loss.

Inflammatory diarrhea (exudative) occurs in the case of intestinal mucosal disease (regional enteritis, ulcerative colitis, pseudomembranous colitis, tuberculosis, lymphoma, tumors, etc.) that lead to inflammation of the mucous membrane and the appearance of sores and swelling. Therefore, in the intestinal contents may appear blood plasma, serum proteins, blood and mucus, which significantly increases the amount of fluid in the stool. The occurrence of pathological processes in the mucosa of the terminal part of the digestive tract causes frequent bowel movements, because it changed the final part of the bowel mucosa, which is more sensitive to stretch.

Motility-related diarrhea (hypermotility) is due to accelerated motion of the small intestine and colon. It occurs most often due to secretion of different active substances (vasointestinal polypeptide, serotonin, and calcitonin) or as a consequence of disturbances in the activity of the autonomic nervous system (especially parasympathetic). Diarrhea can lead to fluid loss and dehydration occur, disorders of salt and the relationship of vascular collapse due to which a timely response in terms of stopping or, better yet, prevention is extremely important. Bullardi will stop diarrhea in record time span, it will normalize bowel movements and reduce the existing diarrhea. Thanks to its unique mechanism of effect, Bulardi® Probiotic binds bad bacteria and toxins to itself and removes them from the body. Bullardi has the immediate effect of the proven safety and making it the number one choice in the treatment of diarrhea!

1929 year Fleming discovered penicillin. Since 1940. penicillin is widely used, and that event lead to the era of antibiotics.

Scientific opinion today is based on the thesis that healthy intestinal flora depends on the balance between good and bad bacteria. Normal functioning of the digestive tract depends on a healthy population of bacteria. Colonization and “survival” of the beneficial bacteria in the small and large intestine greatly strengthens its resistance to intestinal diseases.

The assumption of the microflora in the gastrointestinal tract has a functional effect on the overall health status. This is expressed in early 20th century Russian chemist and biologist Metchnikoff. The host microflora in the small and large intestine begins to develop by the very birth of the child, and it is considered that in healthy children by the age of fully formed. This creates a powerful defense mechanism in which the child is extremely important for normal functioning and healthy life from childhood until later years.

Under normal conditions, “friendly” bacteria completely dominated by the bacteria that can harm the body and keep them constantly under “control.” Antibiotics can disrupt their natural actions and hurt this balance, killing off “friendly” bacteria, allowing the potential causes of diseases that can develop and cause problems. Any antibiotic can upset this balance of good bacteria.

Serious and fatal reactions to antibiotics are more extreme conditions. These reactions can sometimes occur when antibiotics for certain families of drugs, penicillin and cephalosporins, especially oral route entries. Similar to these cases, disturbance of bacteria in the stomach (intestines), allowing bad bacteria to develop and prevail. Usually the Clostridium genus., For example. Clostridium difficile, which produces a toxin that attacks the intestinal wall, causing severe diarrhea, which is called pseudomembranous colitis.

Bulardi® Probiotic plus is the only product on the market that can be used alongside all the antibiotics. It regulates abnormal intestinal microbial balance and stops diarrhea in record time.

If you take Bulardi® Probiotic as a prevention, your chance of contracting diarrhea is reduced by three times. In 60% of cases prevents recurrence of Clostridium difficile infection that is usually caused by excessive use of antibiotics!

In summer, diarrhea is frequent, mainly because of high temperatures and frequent travels. High temperatures are suitable for microbial growth, and diarrhea can be caused by bad water and food … In your travels, you may get diarrhea, because of the water changes and new foods even if they are medically correct. The food and water can contain maximum levels of microorganisms common to the area because the local population has resistant microorganisms. So it is not surprising that during your stay in exotic parts of the world, large percentage of the tourists get diarrhea at least once.

Lack of hygiene is common in many trips. The squares, markets, food stalls and restaurants cheaper in poor countries are areas of increased risk of food poisoning and intestinal infections. As countries are noted for their high-risk countries in Latin America, Africa, Middle East and Asia. The climate and the degree of development have the greatest impact on the level of risk assessment.

Children and young adults suffer from diarrhea more frequently in comparison to adults. The reasons are not entirely clear, but it is assumed that elderly people acquired immunity through their life span, and that young people are more prone to adventurism and risk. Although more common in the first few days of travel, diarrhea can also occur later.

Diarrhea can lose a lot of fluid that needs to be compensated for the risk of dehydration. It is recommended to compensate for fluid loss by taking any type of soup bags which contain the salt, which also compensates for the loss of electrolytes. Alcohol should be avoided because it certainly contributes to dehydration.

As an exception should be taken into account the quality of the food is taken. It should be kept for suspicious meals that are prepared or sold in the open, and in particular the need to keep raw food. Fruits and vegetables should be washed thoroughly or peel off even better. A large number of microorganisms are killed by heat treatment, and is therefore better to opt for a proven option and take only cooked foods. When there is no guarantee of the quality of water from the tap, you should drink bottled water.

It is extremely important to maintain hygiene. It is understood the body as well as daily hygiene and avoidance of suspicious contacts.

However, prevention is way better than curing the symptoms. Do not allow yourself to ruin your summer with diarrhea!

Take Bulardi® Probiotic five days before travel and during the whole trip to enjoy your vacation completely!

Bulardi® Probiotic is effective in 90% of cases reduces the risk of diarrhea when traveling!

If you accidentally forget to take preventive dose of Bulardi® Probiotic, diarrhea can still catch you at the worst possible time. Bulardi® Probiotic will almost instantly stop and reduce any unpleasant accompanying symptoms.

You can’t allow yourself that the only memory you bring home from a wonderful vacation is a memory of the horrible diarrhea you had!

How to dose Bulardi® Probiotic:

How long to take: